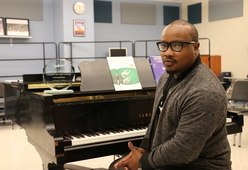 Mr. Theodore Thorpe III serves in his 11th consecutive season as Director of Choral Activities for T.C. Williams High School in Alexandria, Virginia. His well-recognized, life-long experience as a musician brings richness to his leadership as he draws on celebrated talent as a conductor, musical director, vocalist, pianist, organist, composer, arranger and choral master.

EDUCATION
A native of Brooklyn, New York, Mr. Thorpe began his musical training studying piano at four years of age. During his high school tenure, he served as church organist and pianist for the Christian Fellowship Seventh-Day Adventist Church. He graduated from Northeastern Academy as co-valedictorian of his class and as a proud member of the National Honor Society.

In 2006, Mr. Thorpe received his Bachelor of Arts degree in music and voice from Oakwood College in Huntsville, Alabama. Under the tutelage of Dr. Lloyd Mallory Jr. who led the renowned singing group--the Aeolians, Mr. Thorpe served as president, student accompanist, soloist and conductor, where they gave concerts in Poland, Bermuda, and extensively throughout the United States.

Mr. Thorpe received his Master of Arts in music with an emphasis in choral and orchestral conducting from Morgan State University in 2009. During this period, he served as the sole graduate conducting assistant to the chairperson and director, Dr. Eric Conway.

MUSICAL EXCELLENCE
As a multifaceted master musician, Mr. Thorpe’s musical talents have been recognized for exemplifying musical excellence throughout the years, including:
COMPOSER
Mr. Thorpe has composed and arranged songs that have been published and recorded by renowned distributer GIA including a set of “Three Choral Responses” that include, “The Lord Bless You and Keep You”, “He is Lord”, and ”Until we meet again.”
Powered by